Blackmagic are about to (formally) announce yet another camera to add to their current line-up of three camera's. This fourth -the Studio Camera- is said to be a FullHD 1080p camera with a small sensor to accomodate existing ENG lenses.

I'll update this post as the official announcement comes to pass. Would be nice if they'd also announce a massive firmware update to all their current camera's...

Below are TWO updates, the DETAILS and MORE DETAILS

We are extremely excited to have designed the Blackmagic Studio Camera, ever since I was a teenager I have loved live production, it’s so exciting! Traditionally cameras with talkback and tally were very expensive and physically large, so hard to manage. We really wanted to solve this problem by designing a more compact camera that included all the talkback, tally and camera control features of physically much larger cameras.That’s why the Blackmagic Studio Camera was developed. We wanted to build a much smaller camera for portability, however normally small cameras have small tiny screens. We did not want that.

What we really wanted was a much larger viewï¬nder! The result is Blackmagic Studio Camera, the smallest broadcast camera but with a very large viewï¬nder that’s wonderful to use! Precise focus and framing are so easy with a viewï¬nder this large! Of course you get tally indicators, talkback, massive built in battery and of course a fantastic quality camera with ï¬‚exible MFT lens mount.

It’s everything you need in a complete package! You can plug in larger wind protected microphones even with phantom power and the optical ï¬ber is built in so you can run your camera miles away from your switcher! If you need, you can even add a HyperDeck Shuttle and use the camera for general production use!We hope you use your new camera for some amazing live productions and produce some fantastic looking work! We are extremely excited to see what creative work you produce!

Here are the official specs from the press release: 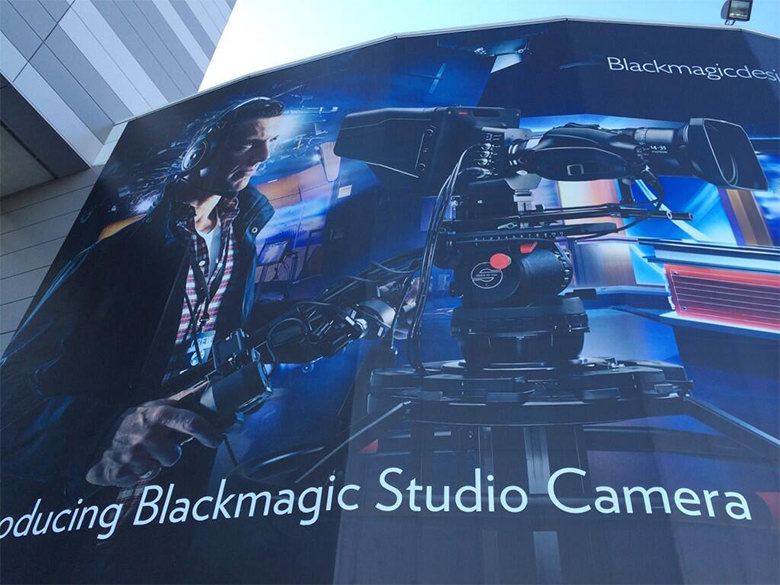